Atlantic to Pacific – Passage of the Panama Canal [March 2020]

The passage of the Panama Canal was definitively on our bucket list – It was the first time for Moonwave and her crew. Actually Moonwave had already done the canal once before when she got shipped from Hong Kong to Miami back in 2014. She was packed inside a big container ship with the mast horizontal back then, so that doesn’t count…

The Panama Canal consists on two sets of locks – Gatun Locks on the Atlantic/Caribbean side and Miraflores Locks on the Pacific side. In the middle is a big lake and some distance to travel. There are also three bridges – one before the first locks, one in the middle and one [Americas Bridge] after the last locks on the Pacific side. [For reference, my whole description is based on a passage from Atlantic to Pacific] 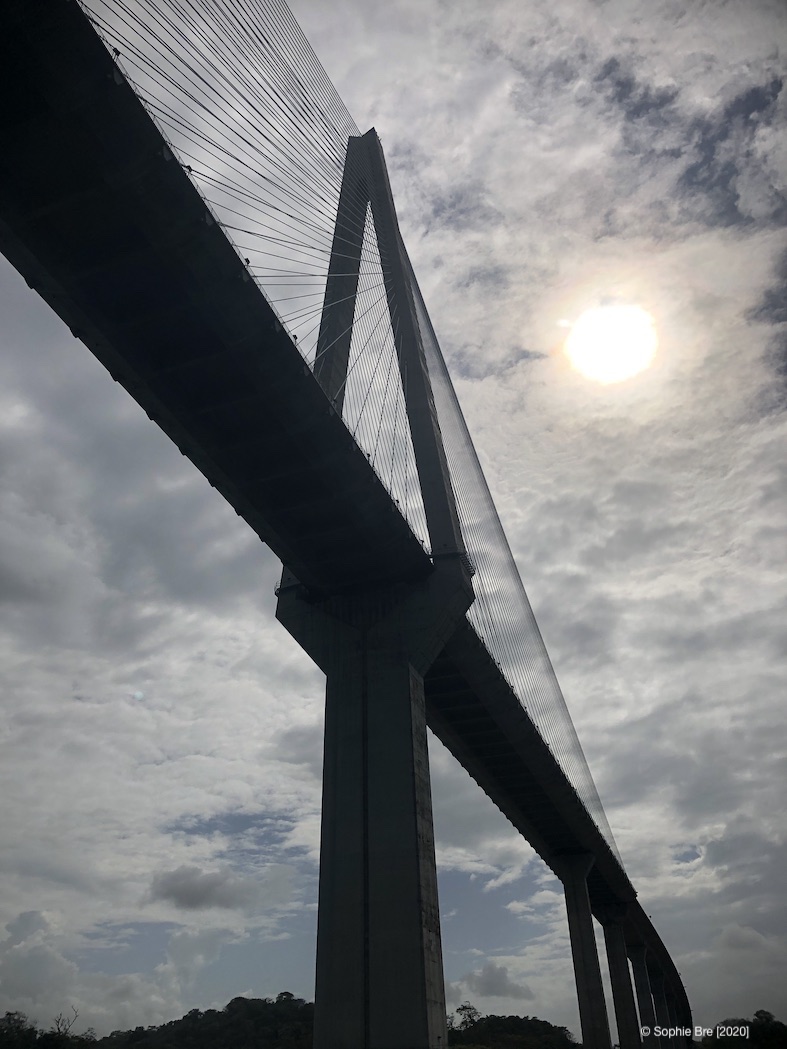 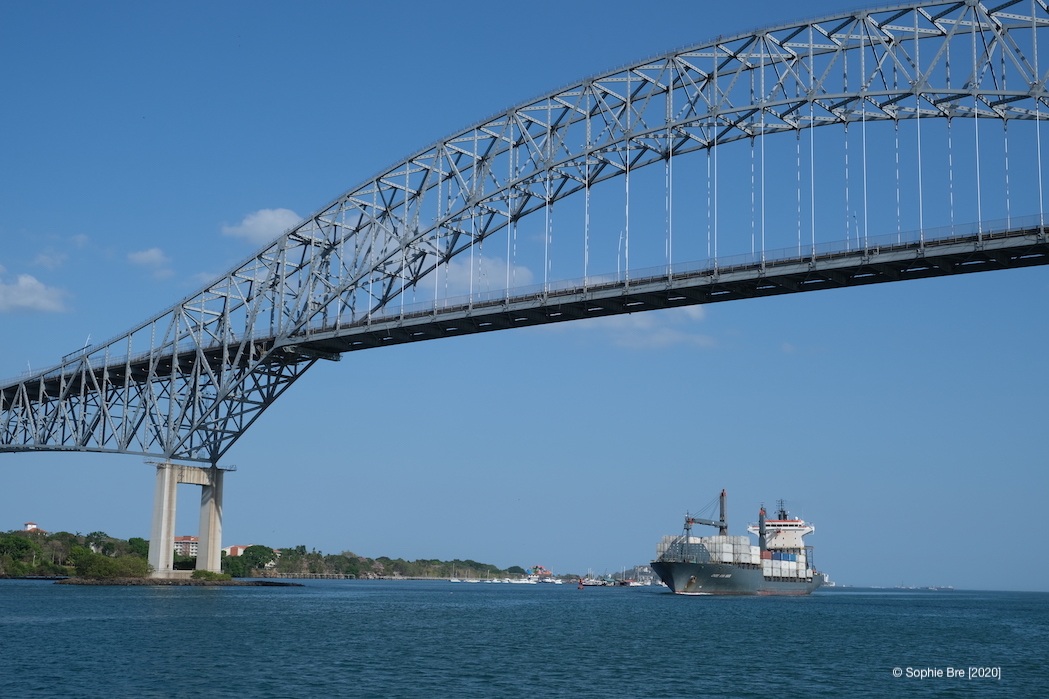 Already in normal times, the planning and organization of the canal passage is exciting. We had an agent who organized the paper works [cruising permit, canal papers etc.] and the measuring of Moonwave by the Canal Authorities. With our bowsprit and tender in the back, Moonwave was “upgraded” to needing a pilot instead of an advisor for the trip across. The situation on site made the scheduling of our passage more “interesting”. We only got our assignment last minute. Nevertheless we made it all in time. The only thing that changed was the fact that we were not passing by ourselves like originally planned but with two other sailboats at once. To be honest, the most “nerve wracking” moments of the whole trip where the moments when the other sailboats were “nesting”. Which means tying up to Moonwave. For the first lock passages we had a blue monohull on Portside and a small aluminium monohull on starboard side. For the second part/day, the small aluminum boat didn’t make it in time across the lake so we were only two boats to go through the Miraflores locks together.

A couple of weeks ago in the comments of the blog section, I got the question of how to manage the Panama Canal passage with an Electric/Hybrid Boat – the answer is “easy”. The whole trip took about 24h from picking up the Pilot at the “flats” anchorage in front of Shelter bay Marina to dropping off the second pilot close to Flamenco Marina one the Pacific side. Actually the pilots get picked up by “pilot” boats that come alongside, so we didn’t actually stop to drop them ashore.

Moonwave was placed in the center of the “three boat” nest. Also when we were two boats only, Sebastien was in charge of maneuvering the whole “package”. We had a great pilot for the first part of the trip. He explained the currents in the passages and was very pro-active. By the way he has a great Facebook page with beautiful pictures from and around the Panama Canal – check it out: “Panamá, Paisaje y Navegación”

To come back to the pilot, he was impressed by the “agility” of Moonwave under engine, her steering system capacities and maneuverability. He also appreciated that fact that with the electric engines Moonwave could be maneuvered at very slow speed to adapt to the speed of the line handlers ashore walking alongside. 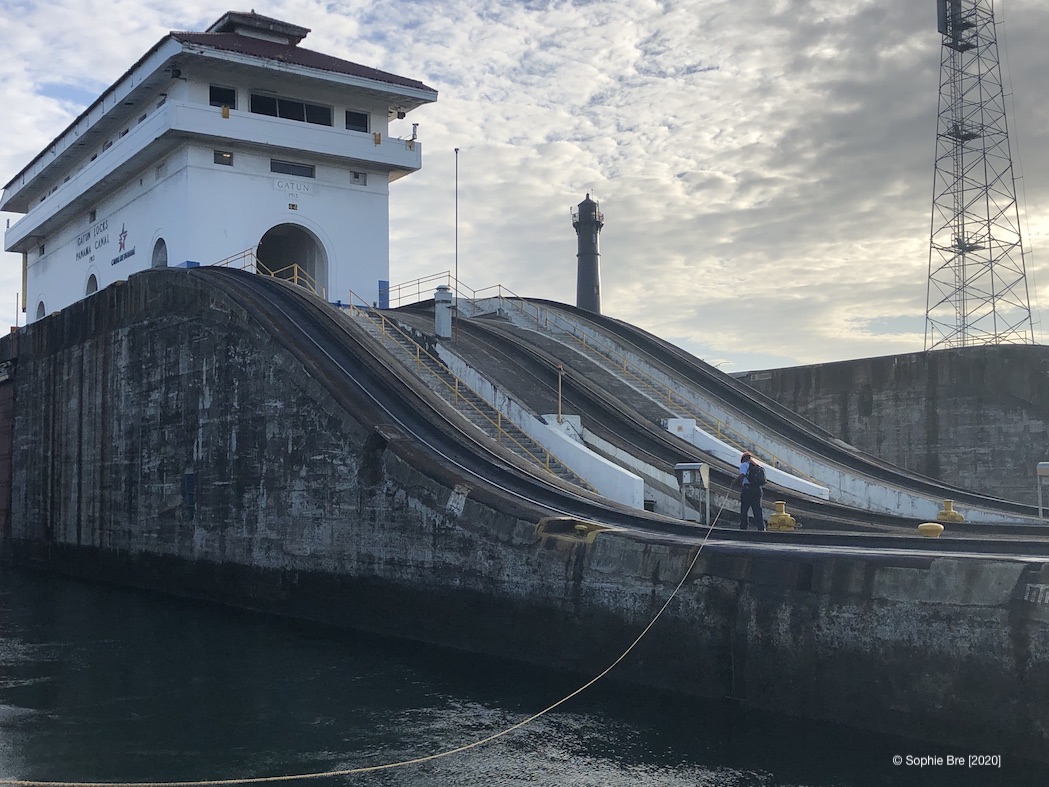 The high torque of the electric propulsion system also helped to maneuver with the two extra sailboats attached in the current and winds.

We passed the locks under electric power only and during the longer passages to and from the locks we topped the battery up with our diesel generator. Not sure if the two other boats attached to us realized that they got an “electric” boat ride ;-)

To come back to the Canal – the first three locks are going up – this means we went into the first lock behind a big cargo ship [The Blacksmith] and the doors closed behind us. As soon as the doors are closed, the water starts to rush into the chamber and Moonwave got raised. The water looked like boiling – very impressive at which speed the chambers filled up. The lines ashore had to be taken in step by step to keep the boats nicely centered. This happed three times in a  row before entering the Gatun lake. Unfortunately it was dark for our trip through the lake. 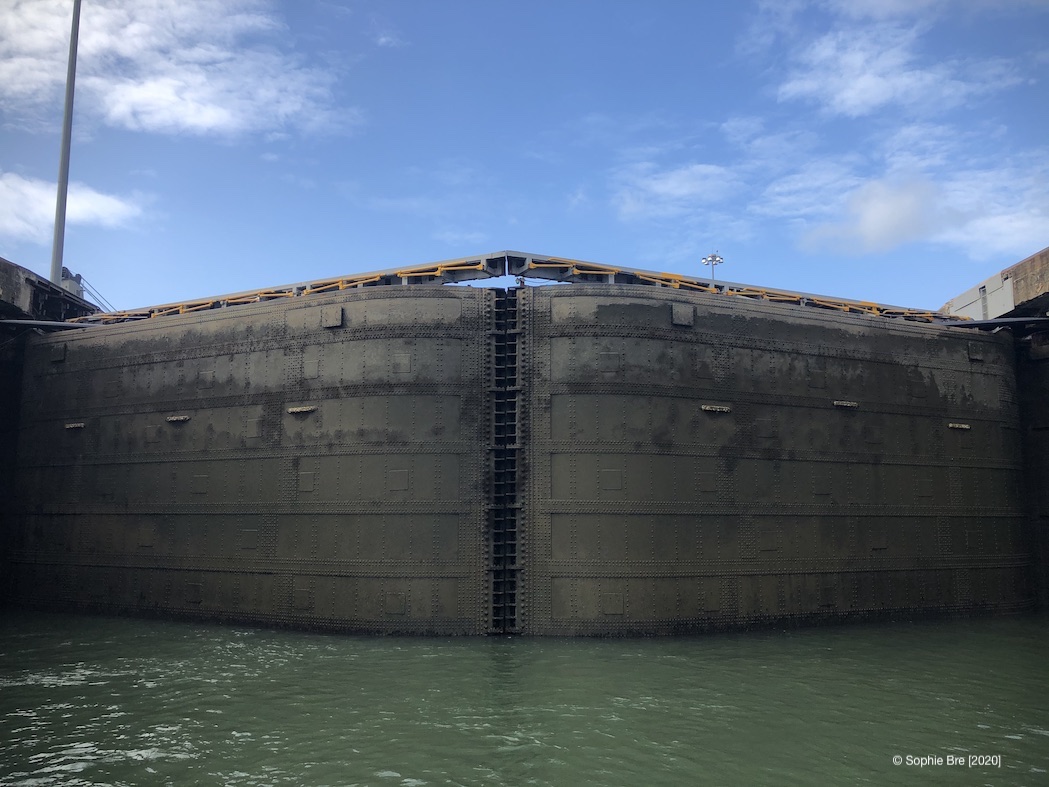 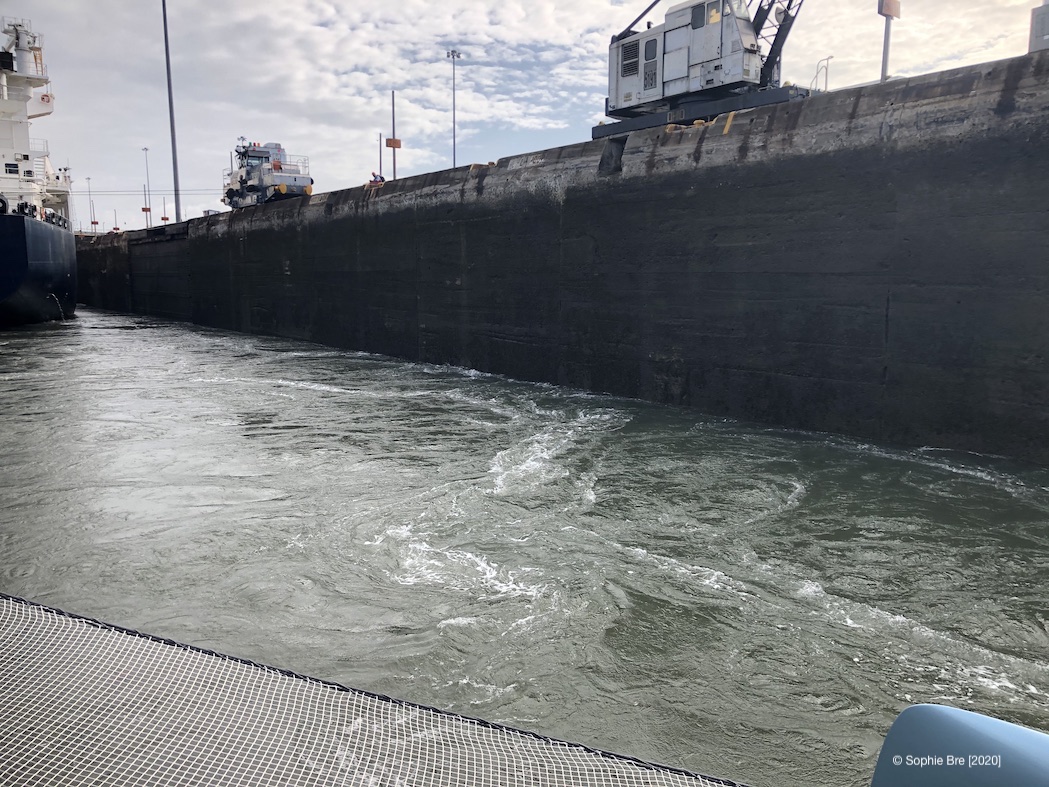 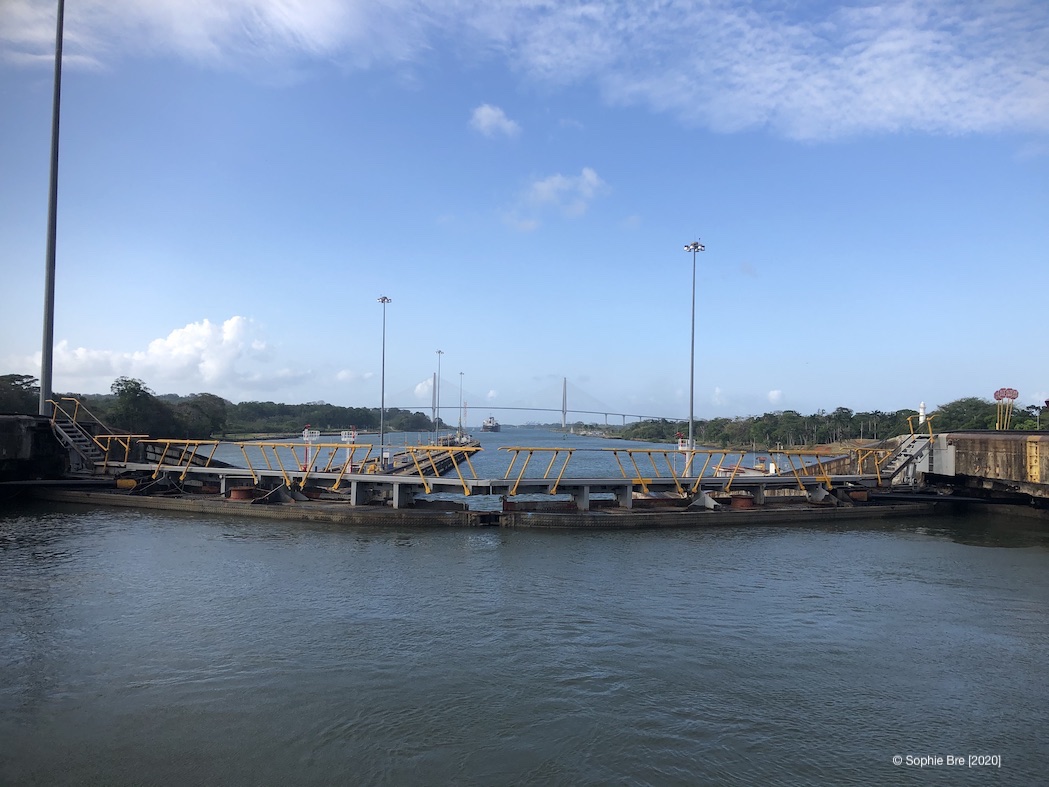 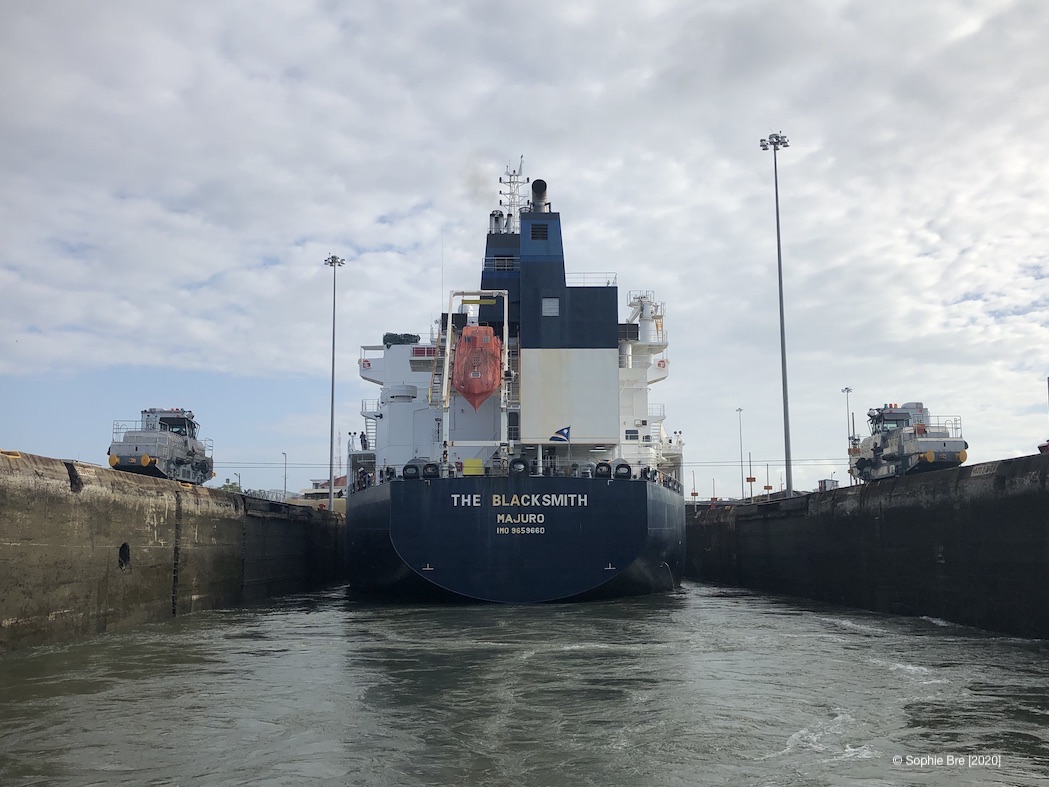 We then spent the night and the morning on a buoy in front of Gamboa. The water of the lake is mostly fresh water – but not a good idea to go for a swim as there are lots of crocodiles. We saw some on the shore sunbathing. 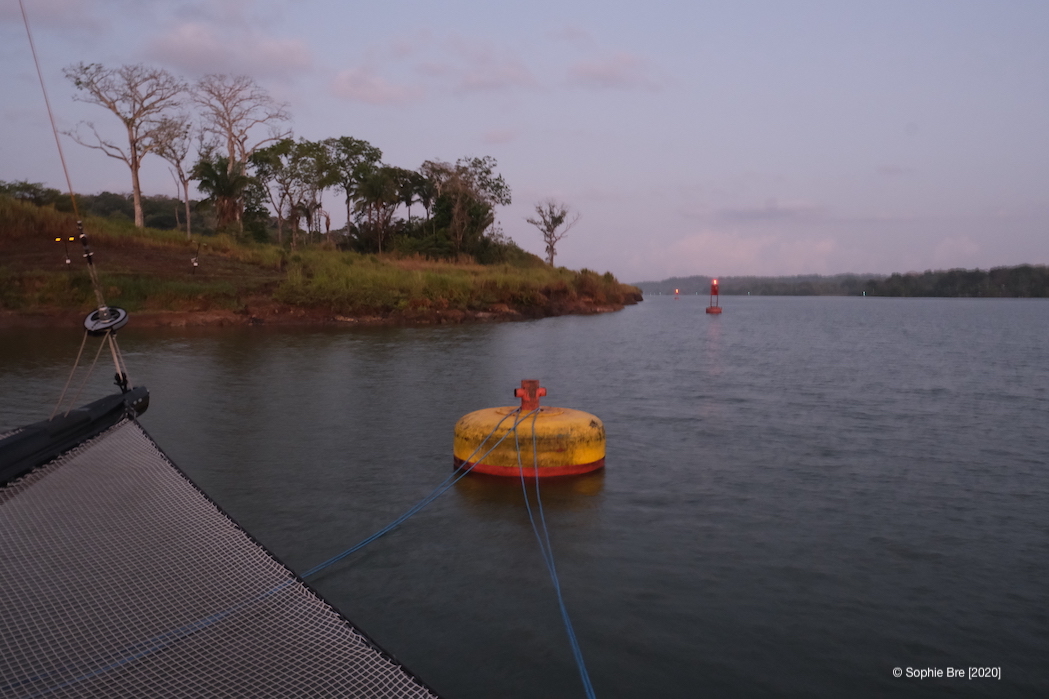 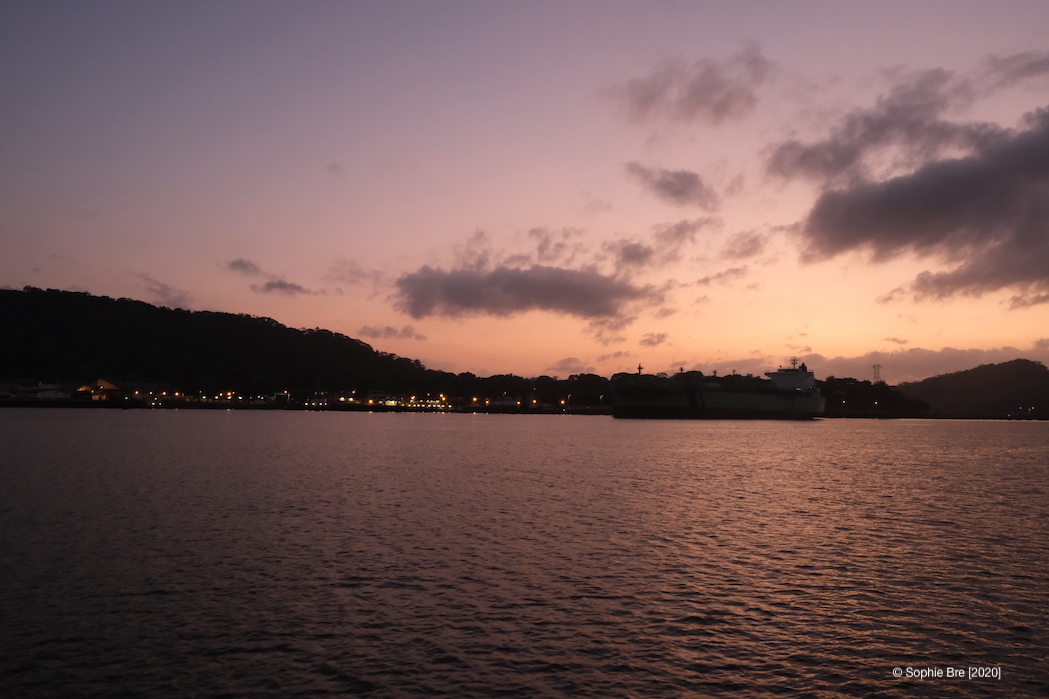 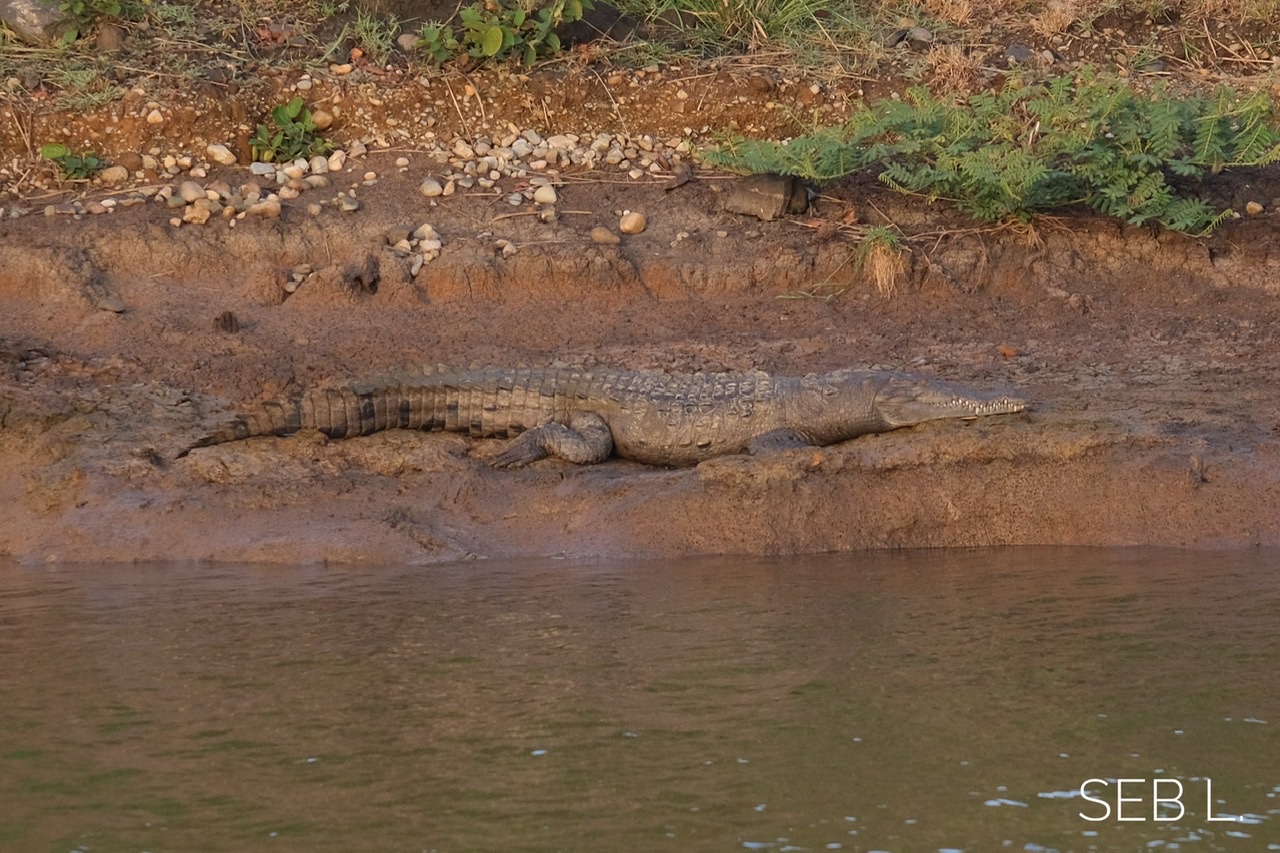 On the second day, the three Miraflores locks took us down to Pacific sea level. They are not in a row like the Gatun locks. This time we were in front of a big Car carrier ship [Morning Christina]. The locks are split in two – one first and the other two together.  On the way down it was important that the lines to shore are always a bit slack to control the positioning in the spot. There can be strong current but Sebastien and Moonwave managed amazingly. 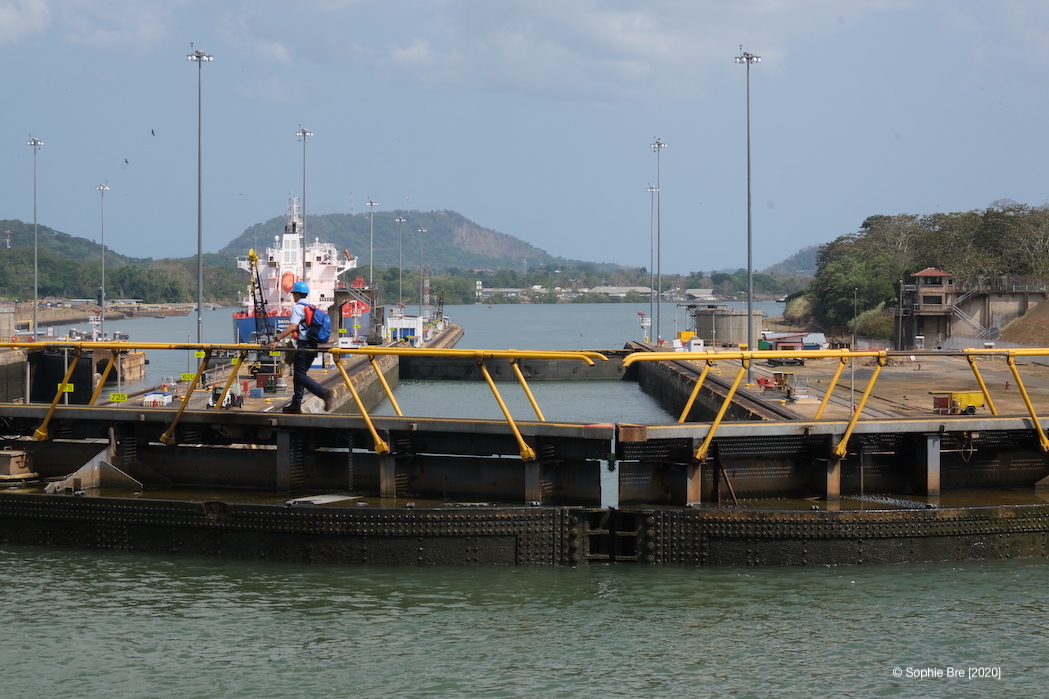 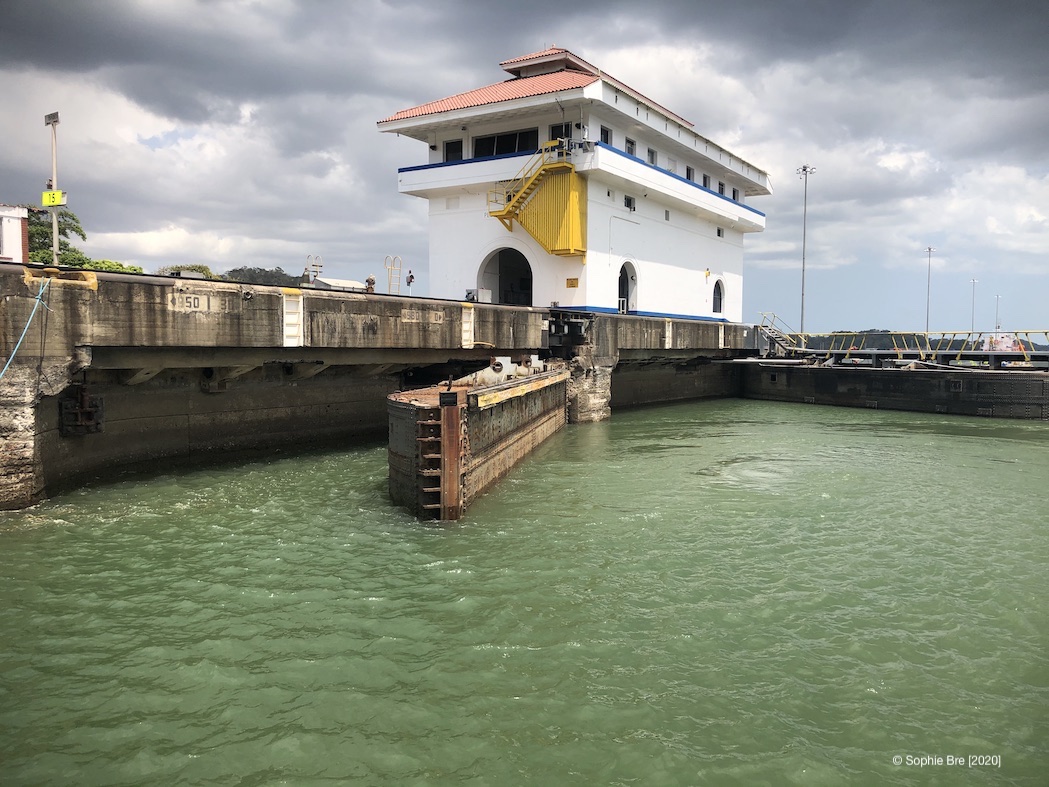 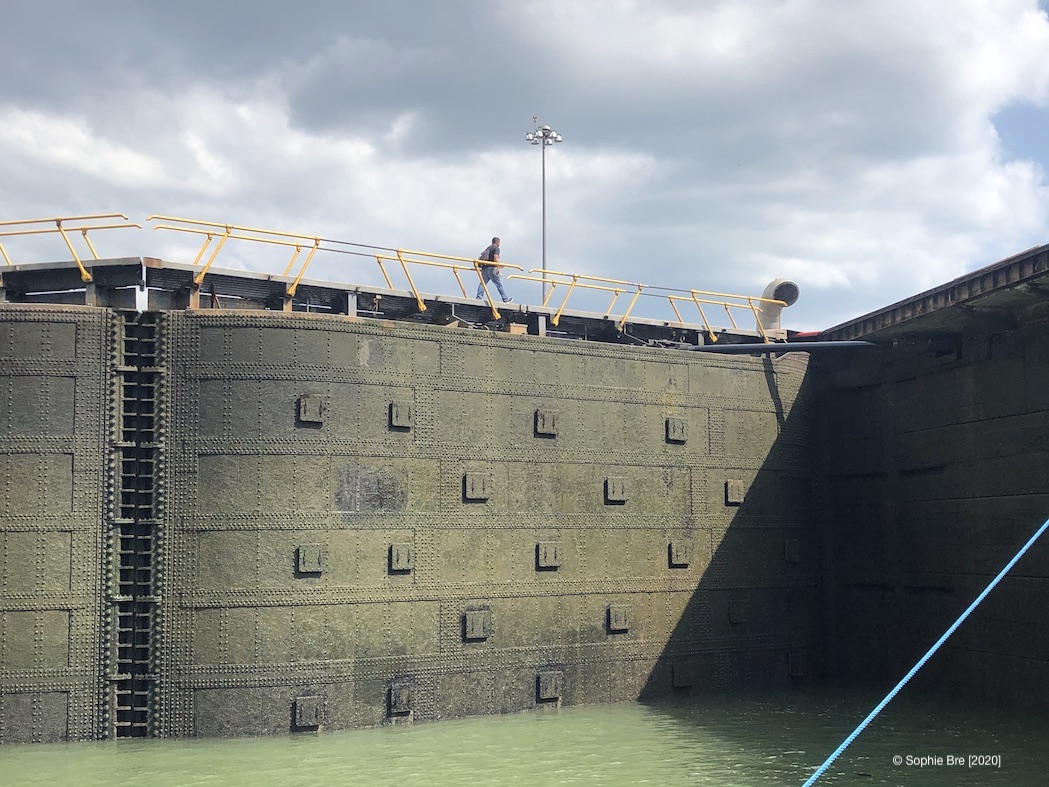 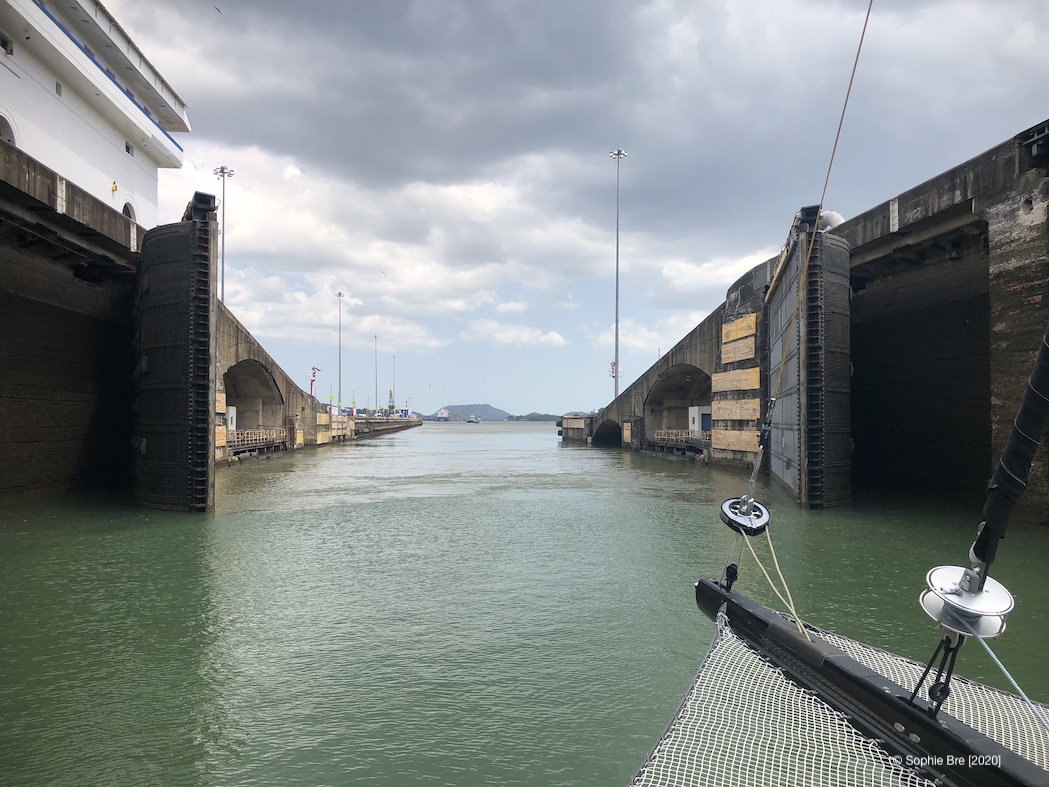 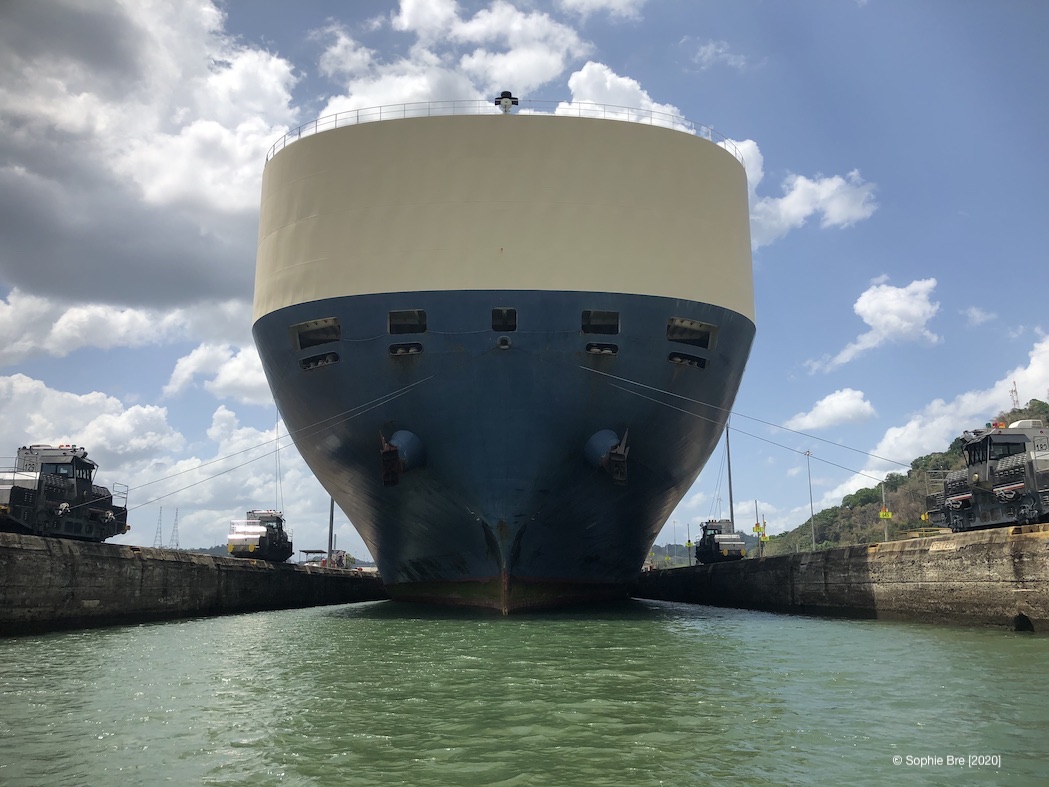 Once on the Pacific side, our line handlers and pilot got picked up and we continued our trip toward the open. We had cleared out of Panama right away due to the actual circumstances in the country and the world. Let’s see where the wind will bring us and which countries/islands will be welcoming us within the next weeks.

The Panama Canal was definitively a memorable experience and we are very impressed by the functioning of this “more than 100 year old” masterpiece of engineering… Like they say “One Country divided, the world united” ;-)

And I guess we will have to come back one day to visit Panama City, cruise the San Blas Islands and there is lot to discover on both coast of Panama – Panama seams to have more to offer than just the famous canal… 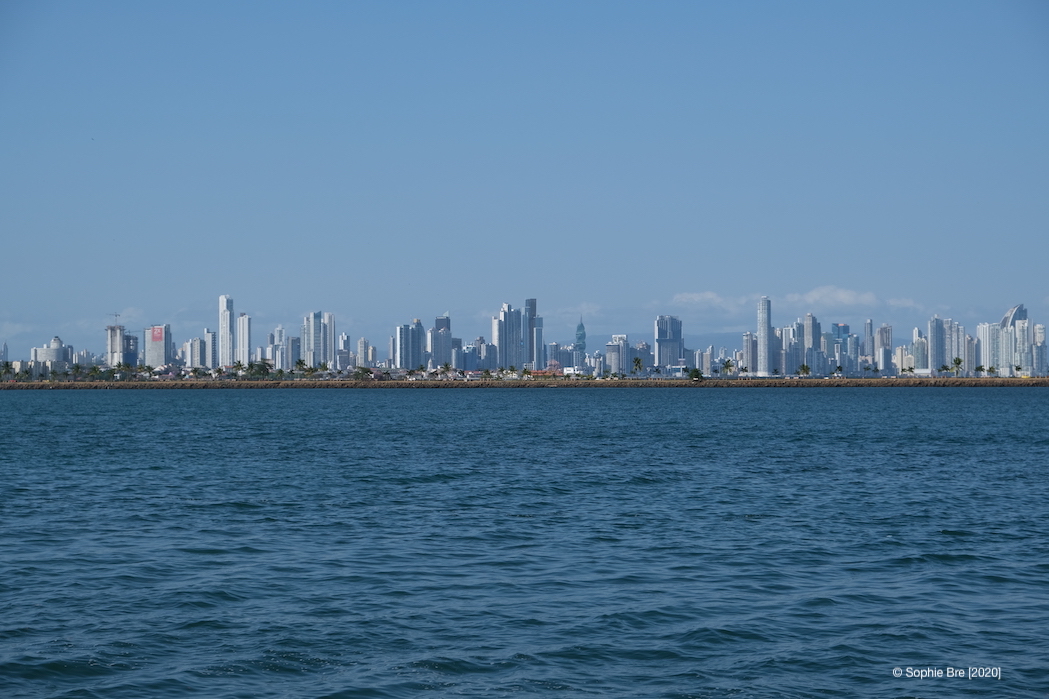 Here are some more pictures from along the way: 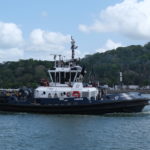 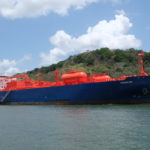 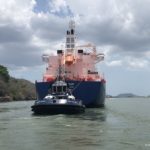 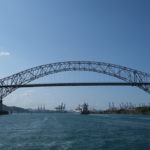 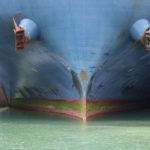 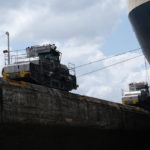 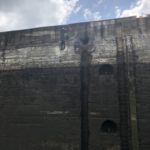 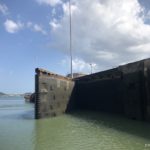 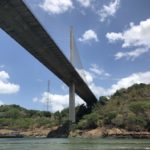