by Sophie
Cruising, Delivery, Electricity on board, Hybrid System, Indian Ocean, Life on board
2 Comments

If you draw a straight line from Bali to the Seychelles and measure the distance – this will show you around 3800 Nautical miles. That’s the theory but unfortunately not feasible, at least not in the month of March. The southern Indian Ocean was still in active hurricane/cyclon season and therefore sailing a straight line south of the equator was not an option. Make sure to check out the first article “Crossing the Indian Ocean – Part I”.

Currents and prevailing winds had to be taken into consideration for the passage routing as it is not fun to beat upwind against the wind and current for days in the open ocean. The passage planning took us from our departure latitude of 08 degrees South to almost 5 degrees North to our destination at 04 degrees South again. Yes, this sounds crazy but it was the safest and more “comfortable” route to take. And not only it sounds long, it also felt long but if you consider tacking upwind you easily also double the distance sailed in a more uncomfortable way. [For those who are not familiar, one degree is equal of 60 nm.] 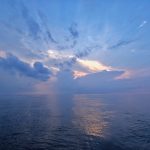 Unfortunately we had lots of patches of no wind or very very light winds. I have to mention that the wind forecasts for the Indian Ocean were very inaccurate und never in our favor. We often had 10 knots of wind forecasted but ended up with 1 to 2 knots of wind. Moonwave sails very well in even 5 knots of wind but with 0 to 3 knots of winds even she struggles. We did some motor sailing to get from one patch of wind to the next. And the hybrid system came in very handy for that. This might surprise but it was extremely fuel efficient. We often just assisted with about 1 KW of power to get a couple of knots of speed to assist the sails and that meant that we could run of the battery for hours, almost days before the generator started and topped the battery up again. This would not have been possible with a conventional Diesel engine set-up.

There was no need to run the engines at full power. A Diesel engine even at low rpms would have consumed a lot of diesel, a conventional boat might have gone faster at some times but they for sure would not have arrived at destination with more than a third of the diesel tanks still full [after over a month at sea] and a fuel refill on the way would have been necessary. Considering the actual administratif nightmares we are very glad to have avoid that. We also have small diesel tanks, just to mention.  The electric engines are quiet and almost not noticeable – we would have hated to have a composition engine running for hours. And as soon as the winds picked up we were nicely sailing again. 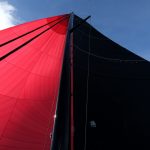 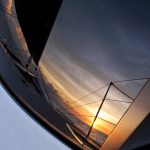 That was the first time we had to run the engines during an offshore passage. We had sailed all through the the Pacific Ocean and the Atlantic but we had been warned that the Indian Ocean is different in many ways. [Let me know in the comments below if you have any further questions]

One nice anecdote, when we passed the equator from South to North, we did this almost exactly opposite of the globe [longitude West / East] from our passage North to South close to the Galápagos Islands in June 2020. And Neptune got a nice shot of rum for keeping us safe at the passage of the equator each time as it is custom.

Just 90 nautical miles north of our final destination we got caught in a big squall [thunderstorm]. The wind went from speeds in the low teens to suddenly over 33 and than even over 50 knots in less than a minute. Definitively not fun in the middle of the night … Before being hit by the high winds, we had noticed that the current had turned around 30 degrees to the south. This must have been a convergence zone of two currents that caused the “mega” squall as we never had accounted such high wind speeds during any other thunderstorm during the passage and there have been a few.

In general the currents that we have “encountered” in the Indian Ocean are strong, some have been in our favor – like up to 3.5 knots of East to West current – after the Maldives towards the Seychelles. Others have been against us along side Java and parts of Sumatra.

We passed through the Maldives at night so we didn’t see anything other than a couple of lights of Male. We also met no traffic there.

In comparison, we had the feeling that there were less birds and marine wild life compared to the recent Pacific Crossings. But when we spotted some, it was just breathtaking. We saw four times big schools of dolphins and once they came to play at the bows of Moonwave. Just at sunset this was a magic moment.

During one of the quiet times with extremely calm seas and no wind, we spotted a big Manta Ray at the surface – very majestic and an awesome sighting. And during the first days Sebastien spotted a pot of beluga whales [or similar] but they didn’t approach Moonwave neither.

Regarding birds, we had one “hitchhiking” visitor but other than that even in the distance there wasn’t a lot of bird action. 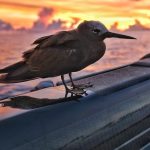 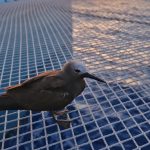 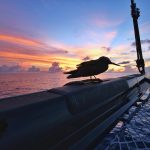 We tried our luck in fishing again – the total count comes to two mackerels and one big eye tuna. We lost again a couple of fishing lures and hooks but with all the fishing boats that we have spotted, we doubt that there is a lot of fish left in the Indian Ocean.

And than there is the “sad” part – plastic everywhere. Not only along the coasts of Indonesia but also in the middle of nowhere we encountered floating plastic trash. Especially when the water was very calm, the plastic on the surface was easy to spot. We also caught some plastic bags with our fishing lines.

We also noticed that the rain/thunderstorms that hit us in the area south of India brought us lots of black sleek and pollution on the boat. The water left black marks on the deck. Pollutions is not only in the water but also in the air and it travels far.

Along the coast of Sumatra, there were lots of fishing boats. Some came close to check us out. This is always a “hairy” situation as it is difficult to predict how they will react and turn. So we have to react quickly which sometime means to drop the spinnaker urgently to escape. The Indonesian fishing boats were well lit at night, we could spot them from more than 4 miles away, which is quiet amazing. But on the other side, almost non of them had AIS and even only few are visible on the radar as most of the boats are wooden.

South of Sri Lanka we met again lots of Fishing boats. This time most of the had AIS and even their nets were fitted with AIS beacons. Some of the beacons were not correctly labeled. For example on beacon “pretended” to be a 142m passenger vessel but it was only a buoy with a “drifting” net below.

We encountered also huge unlit buoys that we suspect to be drifting nets as well. Luckily we always spotted them during the day as it would be very messy to hit one of those big buoys even at low speeds.

There was a huge number of cargo ship and tanker traffic just South of the Northern Tip of Sumatra. There was no traffic separation zone but it almost felt like passing Gibraltar or Singapore. In general we have notice that the average speed of cargos and tankers is around 12 knots only a couple had higher speeds. It seams like they have slowed down compared to a couple of years back but my memory might be failing me. 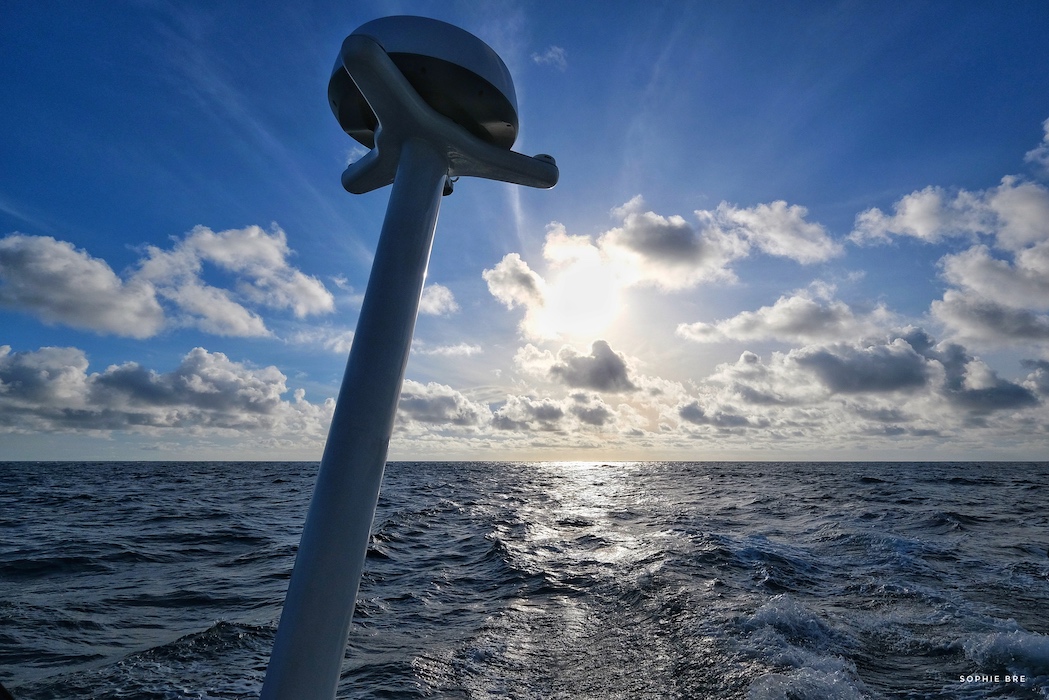 From the Maldives to Seychelles on, we encountered almost no ship traffic at all. There were a couple for fishing boats North of the Seychelles but nothing compared to the coast of Indonesia or Sri Lanka.

One more thing to mention – on the calm days it has been extremely hot on board. And the southern Indian Ocean has pretty amazing sunsets and sunrises… 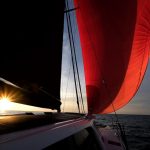 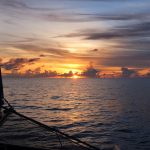 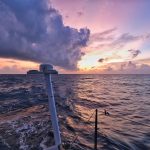 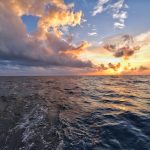 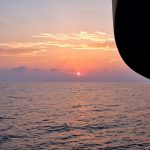 And by the way – with the arrival in Seychelles we have done almost 20.000 nm in the last twelve months [from Martinique to Seychelles]…

About the Author
Moonwave's crew Sophie is with the boat from the beginning and enjoys to share her adventures on board on our Moonwave website.
Social Share
2 Comments