Sailing the US East Coast – US Coast Guards

by Sophie
Atlantic Ocean, Cruising, US East Coast
Comments are off

I might have already mentioned in one of my last posts that we are pretty impressed by the US Coast Guards – here some more “details” why. Not to say that other country don’t also have have great services like the US Coast Guards but you just don’t hear “them” that much on the VHF radio.

When sailing up the coast from Florida to New England and around New England, we are constantly listening to VHF channel 16 and I must say the interactions with US coast guards are almost non-stop. In the Caribbean islands, it is nice to hear the weather forcast from the CrossAG and that about the most you hear on channel 16 when in those latitudes. In China and most Asian countries, the “emergency” VHF channel (16) gets often misused for playing music, singing or long chats between fishing boats in the local language – I know that sounds pretty bad and it is really un-respectful and in the end really annoying. After these experiences we are amazed by the US Coast Guards here at the East Coast as they are just non stop interacting with people asking for help. It’s the busy summer season so there is a lot going on.

The range of matters that they are getting called for and assisting is pretty wide from “unmanned” kayaks or “stand up paddle boards” to smoking engines and lost keels, man over board alarms, people in the water, accidents with marine life – there is a lot going on – some cases are more serious than others. We remember well the rescue of our friends on the Gunboat 55 in the North Atlantic last winter, luckily the Coast Guards were able to get them by helicopter.

One afternoon in Buzzards Bay we were happy to help as well – we received a Mayday call on the VHF from a small boat that was taking on water. The small boat didn’t have enough range on the antenna to directly talk to the Coast Guards so we did a “relay” in passing over the information and coordinates received. We also went on a “rescue/assistance mission” to the boat in distress with the tender to help. Coast Guards and a tow-service provider were also on their way and faster and for sure also more efficiant than us with our tender – so we could return to Moonwave safely knowing that the persons in distress have been helped. It is our aim to help the sailors in distress as we would want them to do the same for us. The coast guards are often assisted by Tow-Boat US or Seatow in coastal areas for certain rescue or towing job – those service providers are also doing a great job.

We were lucky to be able to see some of the training of the coast guards in NC and even in freezing cold water and temperatures these guys know what they are doing. When the Coast Guard members really get to action, every minute counts and no effort is too big as someones life might on depend. We also admiring the patience and professionism of the Coast Guards spokeman/woman on the VHF – some situations are for sure not easy. I am sure that they could fill quiet some books with interesting stories to tell.

By the way the US Coast Guards are celebrating 225 year this year.

Here some pictures from one of the “big ships” coming into Boston Inner Harbor with a “parade” and helicoper – please enjoy the pictures. 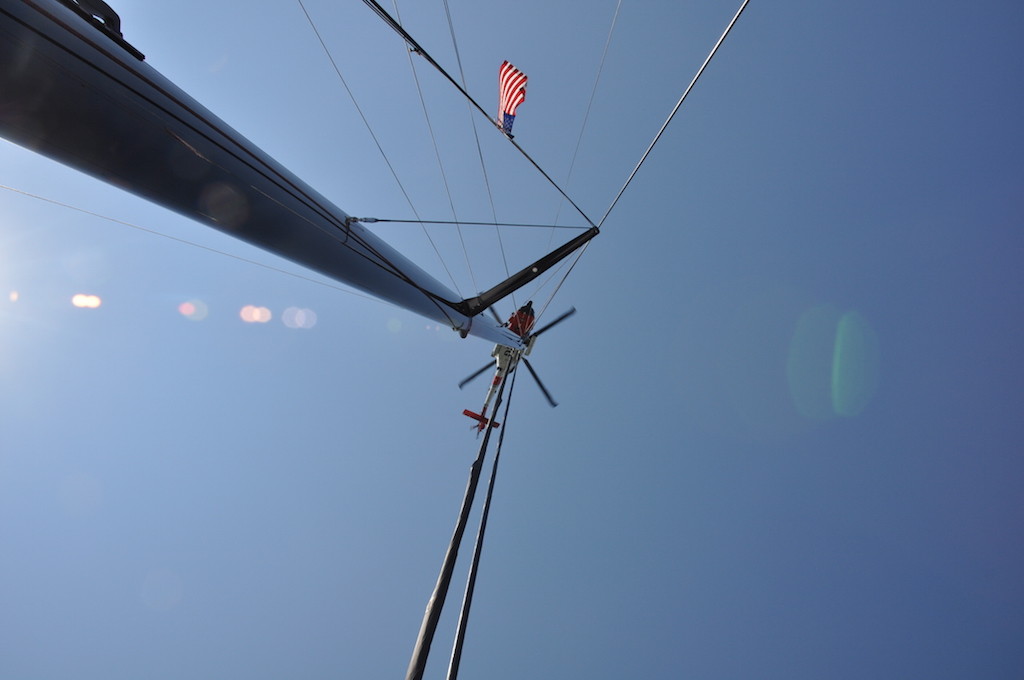 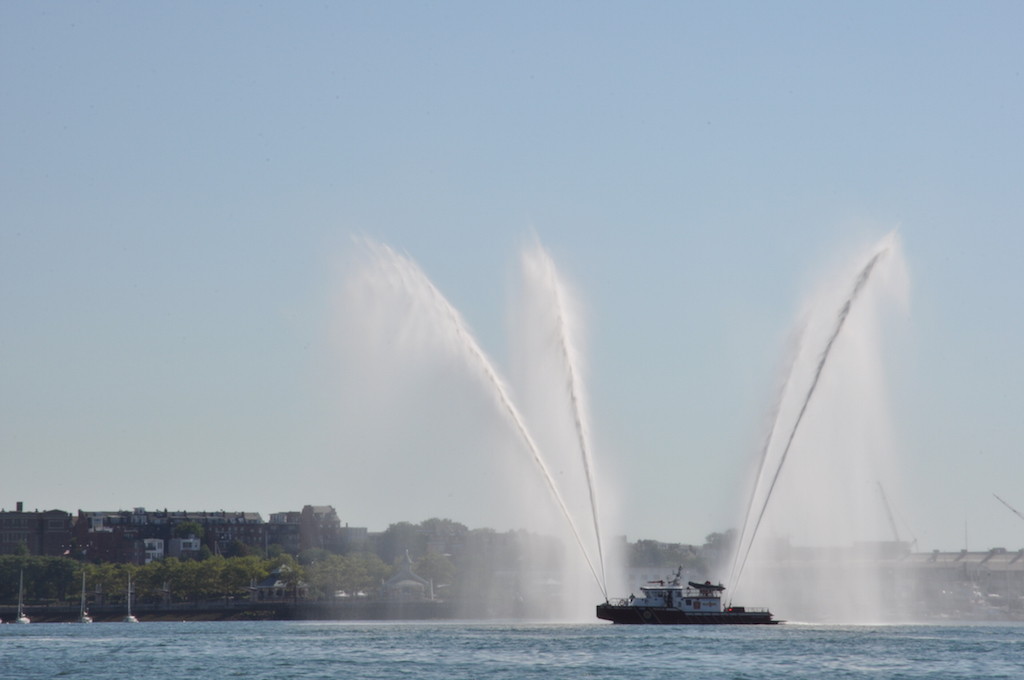 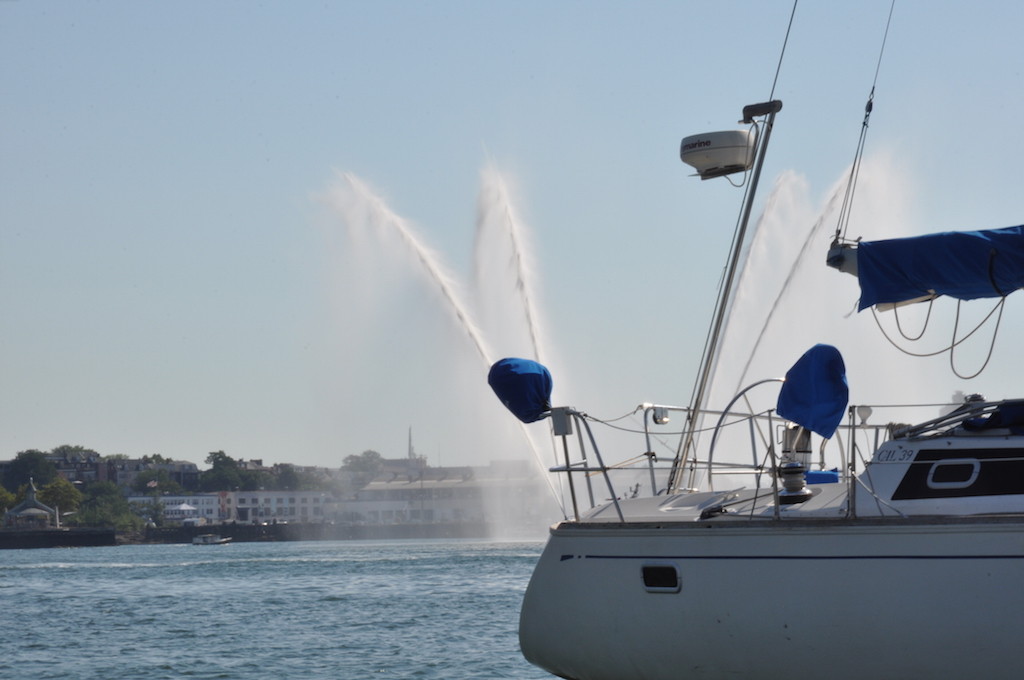 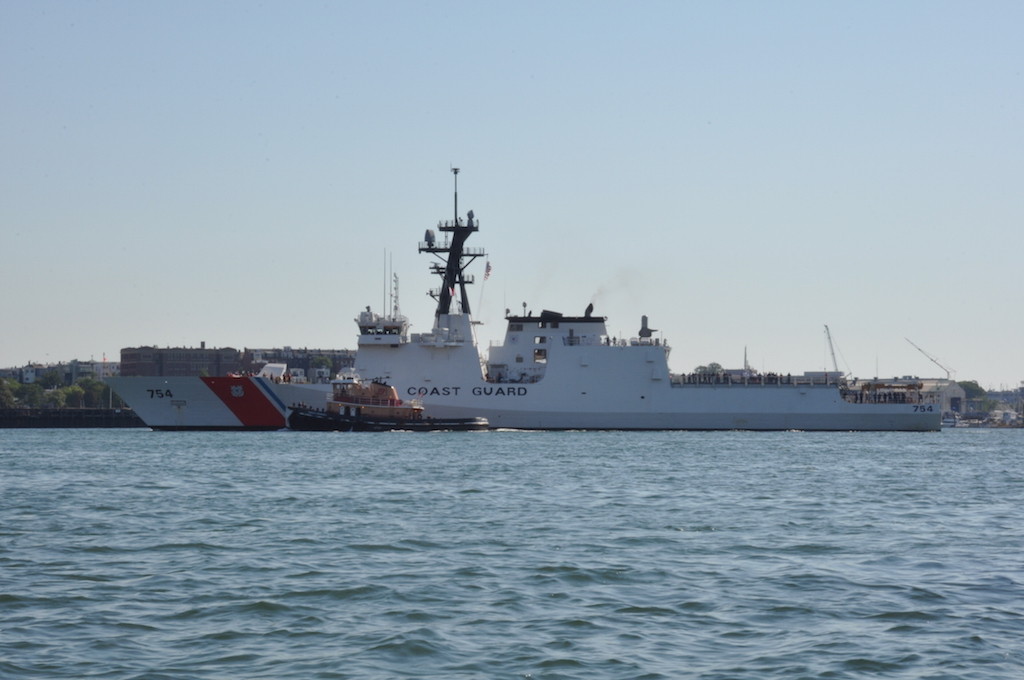